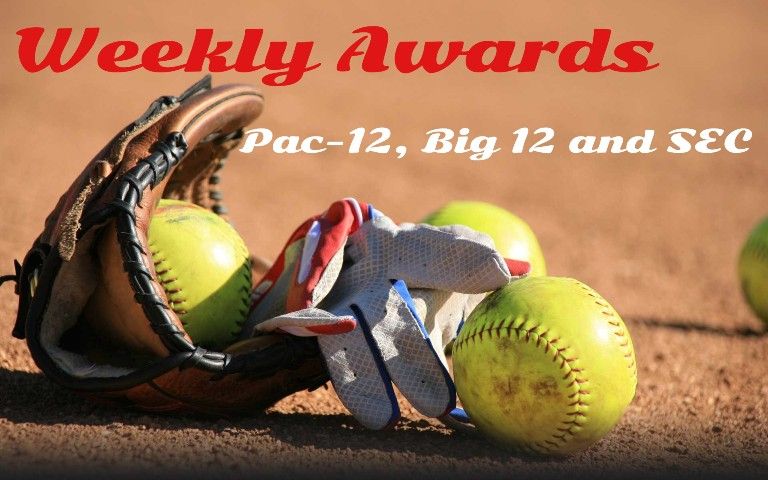 Enjoyed a strong series against Oregon from both the circle and the plate, totaling a win and 21 strikeouts along with three multi-hit games at a .571 clip. Began OSU's rivalry series with seven innings of two-run ball, striking out nine while contributing two hits in three plate appearances. Earned a win in game two of the series, pitching seven more innings while surrendering just a single unearned run, allowing two hits and striking out seven hitters. Added three hits and three RBIs in the Beavers’ 8-1 win over the Ducks. Finished the series with eight hits in 14 at-bats for a team-high average of .571. Returned to the circle in the series finale, pitching another complete game and bringing her strikeout total for the series to 21.

Highlighted Arizona’s sweep over Stanford with a pair of shutouts, including her third career no-hitter in the series opener. Allowed just two baserunners across five innings in game one as the Wildcats blanked the Cardinal, 9-0, in five innings. Dominated the series finale with another complete-game shutout, holding Stanford to four hits and a walk with three strikeouts across seven innings. Across 12 innings of work, limited the Cardinal to a .098 batting average.

Led Washington to a four-game series sweep over California, accentuated by a pair of multi-hit games. Reached base in 7-of-11 plate appearances, leading the Huskies with an impressive .600/.583/.700 slash line against the Bears. Made two sensational catches in centerfield to rob Cal batters of hits. Has hit .428 since returning from injury, all against Pac-12 competition.

Jennings wins the player honor for the third time this season after going 6-for-9 at the plate last weekend against Kansas with three extra-base hits and her 16th home run of the season. The San Pedro, California native had 11 total bases with six RBIs, increasing her season RBI total to 52, ranking second in the NCAA behind teammate Jocelyn Alo. At 28-0, the Sooners are off to the best start in school history. In Big 12 rankings, Jennings is among the top four in average, hits, doubles, home runs, runs, RBIs, total bases, on base percentage and slugging percentage.

O’Leary was dominant in her two starts in the Longhorns’ home sweep of Texas Tech. She was 2-0 with a pair of solo shutouts and 18 strikeouts over 14.0 innings while holding the Red Raiders to a .154 batting average. This is the third weekly honor for O’Leary, who also earned a nod last year and in 2019. In the opener against Tech, O’Leary struck out seven in a three-hitter. On Saturday, in taking the sweep, the right-hander from Castaic, California struck out a career high 11, walking just one and allowing an unearned run. She’s now thrown 19.1 straight innings without an earned run.

SEC players of the week

SEC Co-Players of the Week – Alabama’s Bailey Hemphill, a graduate utility player from Lafayette, La., led the offense in the series sweep of #24 Texas A&M, hitting .833 (5-for-6) with seven RBI and a .923 on-base percentage. Hemphill drew five walks in the series, becoming Alabama’s career walks leader and fourth in the SEC career rankings with 203.

SEC Pitcher of the Week – Tennessee’s Ashley Rogers, a junior right-hander from Athens, Tenn., registered three complete-game wins against Liberty and #8/7 Kentucky. Rogers gave up just two hits and struck out eight batters in the shutout over the Flames. In wins on Friday and Sunday over the Wildcats, Rogers threw 14.0 innings, allowing just three runs on six hits and fanning 23 batters as the Lady Vols earned their first SEC series win of the season.

SEC Newcomer of the Week – Alabama’s Lexi Kilfoyl, a sophomore right-handed pitcher/designated player from Land O’Lakes, Fla., pitched and hit in all three wins over #24 Texas A&M. Kilfoyl earned a complete-game win in Friday’s opener, allowing just one earned run, before earning a save in game two. She also went 4-for-7 with five walks, three RBI and a .750 on-base percentage.

SEC Freshman of the Week – Missouri’s Jenna Laird, a freshman shortstop from East Meadow, N.Y., batted .667 with 10 hits, seven runs scored and four RBI as the Tigers went 4-0 on the week at Saint Louis and South Carolina. In the midweek game against the Billikens, Laird went 3-for-3 with an RBI double, two runs scored, two stolen bases and a walk. In the opening game versus the Gamecocks, she posted career-highs of four hits and three runs scored and added a double and two RBI.